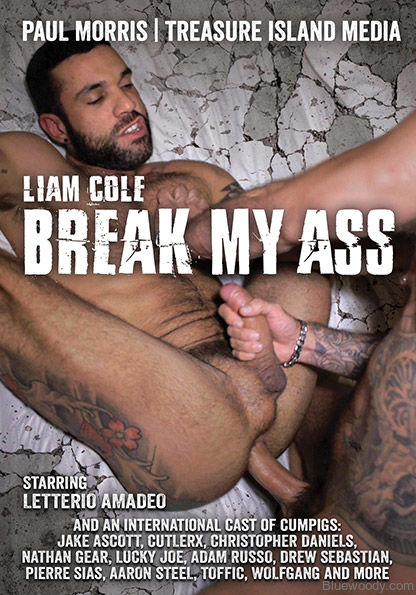 LETTERIO AMADEO (Italy) is a beast and his perfect uncut cock turns ADAM RUSSO (USA) into a shrieking little man-boy begging to get fucked and take his load. LETTERIO’s body is stunning in this scene -- whether it is his gorgeous tattoos, fine hairy chest, or watching his really nice ass pump up and down as it fucks -- this is superstar top fuck action happening here. The chemistry between AMADEO and RUSSO is so intense you will feel it in your balls!

AARON STEELE (Spain) is that kind of annoying bottom that you just want to shove your jockstrap in his mouth so he will shut the fuck up. Pretty fuck holes should be seen and not heard, right? Masked man JJ (Italy) ain’t having none of it, when AARON makes the mistake of telling JJ to “break his ass”…he happily obliges. Lesson learned, when a top slaps your butt, you don’t slap him back. Especially when you have his 9-inch cock in your hole. JJ’s speedo tan line drives us wild. Just sayin’.

Liam goes to Berlin, hooks up with LUCKY JOE (Germany) and manages to capture this hot 3-way with PIERRE SIAS (Italy) and the amazing dicked WOLFGANG (Germany). No really, WOLFGANG’s cock is a thing of beauty. PIERRE pulls off the flip flop breeding of the century -- well almost -- you haven’t gotten to Scene 9 yet. After getting fucked by the other two guys and taking JOE’s load, SIAS shows he can give it as well as he takes it when he decides to breed WOLFGANG. With PIERRE’s load in his hole, Wolfgang is even more determined to get his cum in his buddy’s ass. These Berliner boys know how to fuck!

Lucky daddy MATTEO LAMBINI (Italy) (beer gut and all) gets to play with his boy JAKE ASCOTT (Italy) -- and by play we mean shoving his fat uncut cock up his hole. JAKE -- handsome beautiful JAKE -- gets a good dicking before he decides to flip the table and return the favor. JAKE power rams his also fat uncut dick deep in his Dad’s belly until he breeds him. These are two Italian men showing us how it’s done in Italy.

There is the kind of top whose dick sends you to the brink. His cock feels so good in your hole you almost can’t take it -- it is THAT good. That’s what happens to TOFFIC (Sweden) when DREW SEBASTIAN'S (USA) major meat strokes his prostate. DREW is loving every second of it. He gets that man-cunt in the perfect place for his meat and impales it over and over telling the bottom to not move. He fucks the human fleshlight just right until it makes him squirt.

Even though DREW SEBASTIAN (USA) had just shot a load, he was soon up and raring to go to give LETTERIO AMADEO (Italy) a good man hammering. Then the unexpected happens, or we have entered the upside down? After fucking LETTERIO in several positions -- the guys decide it is AMADEO’s dick's turn to get some hole. Our penultimate top man DREW is suddenly on his back with his legs up begging for the man’s uncut piece of meat to fuck and breed him.

Yes, LETTERIO AMADEO (Italy) does have a beautiful ass too. FREDDY MILLER (UK) usually bottoms and LETTERIO usually tops, but after messing around for a bit, FREDDY gets a good look at the Italian stallion’s fine butt and has to get it in. The match-up is intimate, kinda like staring at two handsome men fucking through a peep hole.