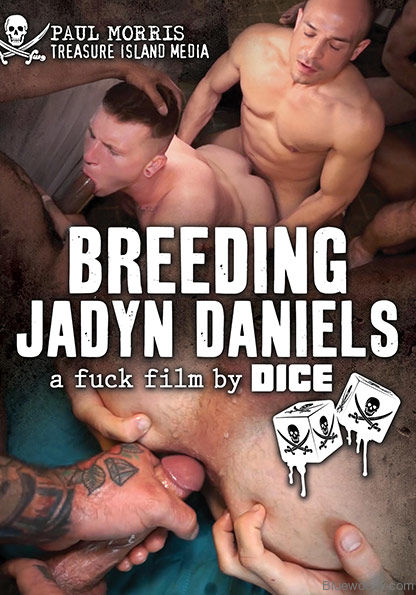 JUSTIN CASE and JADYN had been flirting with each other online for quite some time. When JUSTIN finally planned a trip to the Pacific Northwest he hit me up, asking to fill JADYN’s hole on camera. It was like several months of foreplay had ‘em raring to go, with JADYN throwing his ankles in the air and JUSTIN barely able to hold back before dumping his load in JADYN’s guts.

You’ll notice a submissive streak running through our boy slut JADYN DANIELS. He’s a perfect match for PARKER LOGAN, a dominant hung stud who knows how to put a sub in his place. PARKER abuses JADYN’s ass every which way, leaving the sub well fucked and satisfied.

AARON REESE is a man who loves to drill a hole with his big black uncut cock, and wouldn’t you know it, JADYN DANIELS' hole actually twitches at the mere mention of taking BBC up his willing ass. But sometimes fantasy is easier than reality. When AARON tries tries to wedge his fat dick into JADYN’s pucker, you can see tears in the boy’s eyes. After a couple of hits from some strong poppers, JADYN’s tight ring loosens right up and welcomes AARON home. Once the barrier has been breached, AARON takes to pounding that ass until it overflows with his jizz.

There’s nothing quite like the first time on your back in a sling, and when it’s RYAN POWERS standing between your legs, well, that’s just pure heaven to a fuckslut like JADYN DANIELS. This scene gets a little rough, with the pair pushing each other's limits, but it finishes with a RYAN tenderly felching his own load from JADYN’s thoroughly plowed ass.

Canada’s furry stud ROGUE STATUS has plenty of boys who already call him Daddy, and now we can add JADYN DANIELS to the list! These two horndogs are a perfect match. The moment they climb into bed, JADYN is holding his cheeks open wide for ROGUE’s rock hard cock, begging him to, “Fucking use that hole!” And use that hole he does.

It’s a rare thing to fuck on a saloon pool table, so when some friends invited us to an all nighter in their bar, we brought ANDY ARCADE and JADYN DANIELS along for the ride. Their tryst on the table was filmed at daybreak, after a long night of partying. It’s one of the most intense fuck sessions we’ve ever seen.

JADYN DANIELS wanted a serious gangbang to wrap up this movie, so we gathered men from up and down the West coast to see if we could do justice to JADYN’s seemingly never-ending cravings. As the tops piled into the room, I warned JADYN that there was no turning back. I told the top studs the same thing -- don’t go easy on him, and don't stop fucking until you're all spent! These guys didn’t disappoint -- plowing and seeding JADYN like he was the last fuck on Earth. I could tell JADYN was in pain about halfway through the shoot, but he just gritted his teeth, took another whiff of poppers, and kept his legs in the air. After every guy dumped his nuts into JADYN, a couple of kind felching studs soothed JADYN's wrecked hole, leaving him torn up, wrung out, and blissfully oh so happy. Featuring: JADYN, ABRAHAM, AARON REESE, ASHTON DUCATI, AUGUST ANDREWS, LOUIE L'AMOUR, KEATON MARKS, DANNY BOY, and ADAM RAGAN.

This bonus scene is so good that we almost didn’t include it here, wanting to instead save it for another feature movie. However, since JADYN DANIELS developed a taste for big black cock during this movie, it makes perfect sense to add this energetic scene. GRANT and TIMARRIE BAKER make a perfect black dick tag-team, pounding and stretching JADYN”s pale white form into utter submission. True to his nature, JADYN never really gets enough black meat, and by the time it's all over, he is almost ready for round two...

There's nothing quite like a willing hole taking on anything we can throw at him, and JADYN does just that, man, after man, after man... You're gonna enjoy the fuck out of this one!