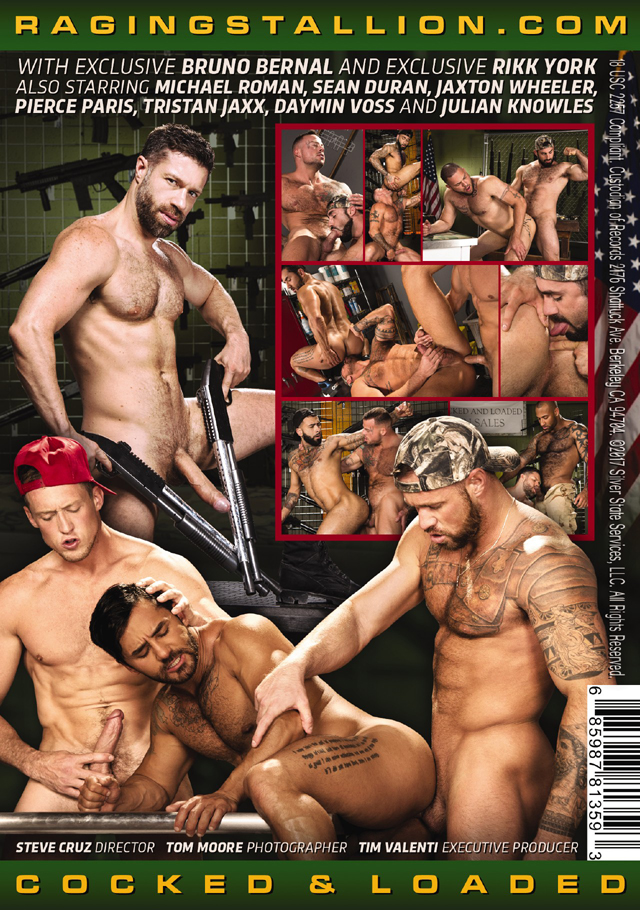 When you visit the 'Gun Show', you'll get your fill of patriots, good ol’ boys, Second Amendment activists, and plenty of concealed weapons hidden deep inside camouflaged pants. With a ton of testosterone-filled studs who want to shoot things, you’re in for a wild ride complete with pumped up country boys wanting to unload their pistols with every gun-totin' stud they see. Steve Cruz directs this deliciously witty spoof of American firearm culture where the men are men, and their guns are cocked and loaded! Michael Roman and Pierce Paris don't trust the looks of Bruno Bernal and start bullying him by chanting “build the wall”. The two rednecks take Bruno to a back room where he sucks their dicks and gets fucked up the ass. He gets the last laugh, though, when he steals the hunks' clothes and tells them to fuck off before he disappears. Daymin Voss has a gun booth that's about to close for the day when Tristan Jaxx comes looking to buy. He gets more than he bargains for when he gets the gun dealer ass up on the table and goes balls deep to complete the purchase. Gun lovers Jaxton Wheeler and Sean Duran, pull up to the show with raging hard-ons, turned on by all the firearms. Rather than get arrested in the parking lot jacking off, the buddies decide to find a quiet utility closet inside. The meat pounding turns to cock sucking when Sean tells Jaxton that he's taking too long. The studs take turns slurping cock to get each other off faster so they can get to the show. Sean slips into the show to hand out Second Amendment rights literature when he stumbles on Rikk York. Rikk likes what he sees in the corn-fed hunk and bends over to let Sean stretch his asshole. After Sean does a pump and dump on Rikk's hot ass, Rikk returns the favor by emptying his chamber all over Sean's tatted face. The ‘Gun Show’ is winding down and Julian Knowles is packing up his booth when he catches Jaxton Wheeler beating off to a rack of his semi-automatic rifles and pistols. Julian sucks Jaxton to get a nice taste before Jaxton shoves his stiffy firmly up Julian's ass to cap off another successful show. 'Gun Show' will have you cleaning your rifle alongside all the hot studs who just want to suck and fuck their way to making America great again!