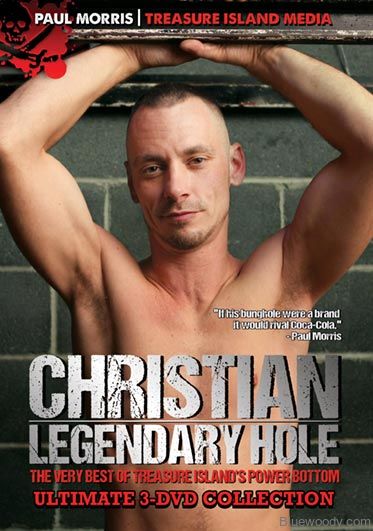 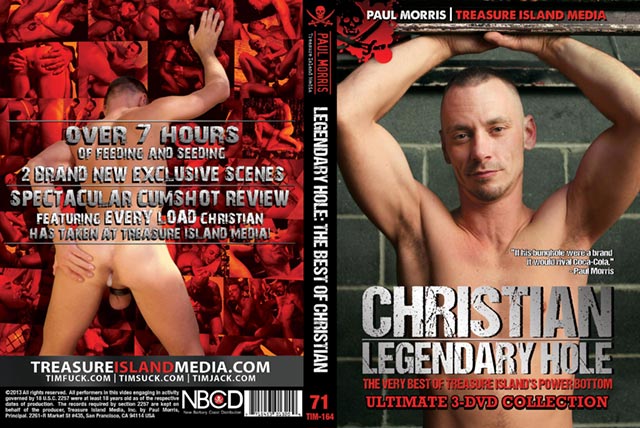 When Christian learned that stud Ethan Sexxtin was in town for a family reunion he called us up and demanded a chance to get Ethan’s big ol' bull-cock up inside him.

Ethan and his buddy Dave were hanging out in their hotel room and what followed was a raucous improvised world-class sperm-soaked suck-n-fuck three-way. But what you can't see is that ETHAN's entire family is in the next room. And the walls are fuckin' paper thin. Christian is far from a quiet fuck, and by the time Ethan and Dave got around to a rough big-dick hole-stretchin' doublefuck, the entire town could hear his helpless fuck-me squeals.

Sean Hunter, a young raw topman put in a request for a chance to ride Christian's obliging butt. And we are never one to say no to a good idea.

In Sean’s living room, Christian bent over and offered up his ass and Sean slid his big extra-long schlong deep and set to riding Christian hard.

The unstoppable Christian is up 'n' at 'em again, ready to blow some more. Cockmaster Lloyd and hung, uncut Adrian are more than happy to oblige. While Christian is the consummate cock-slut, luvin' every cock on the planet, you can see that he immediately falls for ADRIAN's long fat heavy-hangin' dong - with its thick overhang of foreskin.

This is some of the hottest cock worshipin'. It got so electric that, while shooting the action, cameraman Damon Dogg got all worked up and had to pull out his own cock to feed it to the insatiable cumpup.

Christian likes it rough. He likes to get fucked so hard that he can still feel it a couple of days later. So these brutal fuckers had free rein to fuck that smooth perfect man-ass as hard and deep as they could.

One of our favorite moments is when Christian is gleefully taking the full length of Eric Wolfe’s big ol' cock but the fucker isn't porking him as hard as he wants it. So the plucky bottom suddenly reaches up and slaps Wolfe hard in the face. This gets the reaction he wanted---but good.

Scene 8
What Happened to Nice?

You've heard the term "power bottom." Men use it all the time but rarely know what it truly means. To get the definition of the real-deal power-bottom, just take a gander at Christian. This man is the quintessential no-nonsense, dick-taunting cum-sponge, an absolutely insatiable cockslut with no limits whatsoever.

In this fuckfest, we threw together a group of men--true power tops, any one of whom, alone, would give Christian a run for his money. At first Christian is cocky. He jokes with the guys, goading them with taunts like, "Is that all ya got?" But halfway through, the world-class bottom whore gets it: he's in for a ride where he's no longer in charge.

These men are serious rammer-slammers and they're gonna fuck him till he breaks. Christian doesn't even get a moment to breathe as cock after cock rams and slams both his holes simultaneously. All five dominant bullstuds--including Calvin, Mike Mexitop, Curtis, Mark, and Craig--take turns thoroughly claiming each hole over and over and over, filling him to the brim with spooge.

After one last brutal pounding from long-haired Mike, Christian confesses that they've broken him--with a truly satisfied grin on his face.

Christian has already proven himself to be a crowd-pleaser in every sense of the word. Not only do you T.I.M. men love him and beg to see more, but put this whore-boy in a room full of charged-up studs and it's a wonder to watch him go to work. In this scene, the angelic slut takes on a raunchy gang of men who use and abuse him until the poor bottom's ass is dripping hot cock-juice. The gangbang itself is solid white-hot action delivered by the likes of Daniel Bradford, Cory Brandon, Javier, Kurt Kaiser, Chris Rod and Sean Victor.

But it's actually Marcelo Masko who delivers the goods in one of the most voracious felching performances we've ever seen. This handsome charming young man dives in and gobbles and sucks the dickjuice fresh 'n' tasty straight from bottom’s pucker, pooched-out and gaping. If you have an appreciation for felching, you won't want to miss Christian's hole releasing fresh spouts of seed from deep in his guts straight into Marcelo's impish grinning mouth.

Christian isn't used to begging. When you look like he does and have a fuckhole that's a worldwide legend you don't have to work hard to get what you want. But he begged and whimpered when we hooked him up for a return fuck with Eric Wolfe.

In this meaty one-on-one under the city lights of Manhattan, Eric fucks Christian, reveling in doing what a man with a cock this big can do. And he can do a fuckin' lot! This is a truly fine fuck connection. Eric plows Christian deep and deeper with that 10" man-breedin' equipment of his, until he pleads to feel a hot load of sperm shooting deep inside him.

After giving Christian’s hole the crucifixion it required, Tony can't hold back and finally steps up to breed the boy's ready butt. He plows, pounds and digs for gold with his massive uncut prick before sperminating the man’s willing ass.