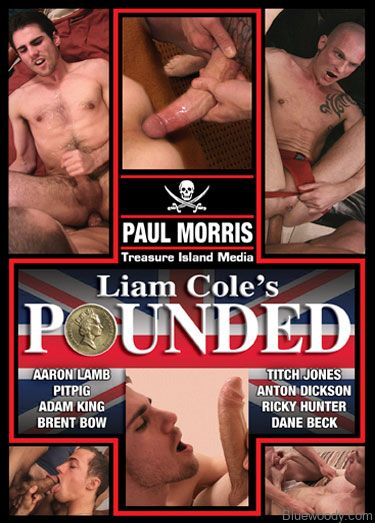 Scene 1: Fucked at the Hoist

The action kicks off at London's sleaziest sex club, The Hoist. I called in three of my favourite tops---ANTON DICKSON, BRENT SOUTH, and AARON SLATER---to fuck a guy known as PITPIG, who is hands-down the greediest bottom I've seen in a long time.

However, after thirty minutes waiting for him to arrive, we figured PITPIG wasn't going to show and I started shooting the three tops playing amongst themselves. No sooner had we started than PITPIG rushed in, shucked his clothes into a corner, and dived into the scrum with his mouth and arse ready for ramming.

Sometimes top guys ask me how long they should fuck and when to cum. I always answer the same: Do exactly what you want, for as long as you want, however you want. In this case that meant a frenzied free-for-all, and as soon as one top seeded PITPIG's hole, that triggered the other two in quick succession. The spunk was literally coming thick and fast, and all of it directed into the PIG's well-worked hole. Only a few drops were spilt but, like any sub worth his salt, PITPIG got right down on his knees and lapped it up off the filthy sex club floor.

This boy is born and built to be bred. He's blessed with a primal, indiscriminate hunger and the kind of firm, fleshy, rounded butt that every load dreams of making its home. For some reason it wasn't until we split that AARON decided he was ready to go on video. Knowing how he's a sucker for size, I paired him with TITCH JONES---a man who can plant his seed so deep in your arse, you'll taste it when you clear your throat.

The result is an intense, focused fuck between two exceptional young men: one endowed with a world-class cock, the other with an arse so superbly fuckable that it remains to this day the love of my life. Enjoy.

Massive-hung TITCH JONES punishes RICKY's hole into submission, and MANHANDLE lives up to his name by literally threading RICKY's throat down onto his massive shaft---he wears the poor guy's neck like a rubber-jonny---before breeding his hole into next week, adding his cum-wad to the one TITCH already shot there. If RICKY wasn't ready before, he is now!

ANTON's over-sized hard-on stands to attention like a teenager's, pointing straight to the heavens. He's so confident as a top that it's no problem for him to take control of an eager little fuck-monkey like ADAM KING. ANTON tosses him from one position to another, stuffing his throat before drilling his arse to completion in expert style.

If you enjoy having your arse mastered, you're going to envy ADAM here.

At 21, DANE isn't the piggiest cocksucker in the world, but there's plenty of time for him to grow into that. For now, there's something about seeing a boy as handsome as this eating multiple loads that I can't resist, and the assembled sperm donors certainly weren't complaining about giving him his feed.

After POUNDED's only oral scene, here's a solid slice of man-on-man butt-rooting. A hole as hungry as PITPIG's calls for the big guns, so I booked MARK O'NEAL a flight into London from his native Ireland. MARK's dominant nature comes out as he alternately plugs both ends of the PIG, giving him several opportunities to suck his own arse juice off nine hard inches of imported Irish dick meat. The over-heated verbal from both guys will please anyone who pops wood for a strong English or Irish accent.

This was AARON's first shoot. I'd seen him fucked by other guys countless times while we were together, but putting it on tape for the world to see was definitely moving things up a gear.

Taking loads is what fucking is all about for AARON, and when JASON STORMME gives him the filling he begs for, it pushes him over the edge. With JASON's dick still inside his cum-filled hole, AARON unleashes a hot load over his own lean torso, where JASON licks it up and drools it out into AARON's gaping mouth.

Fortunately, he also knows how to take it like a champ and made no objection to getting a roasting from sure-shot tops BRENT SOUTH and ANTON DICKSON. He finishes the scene with his fucked-out arsehole oozing freshly planted seed in glorious close-up. What more can you ask?

An understated encounter between two of the most popular men from my first video. This was the first time I shot with scorching hot fucker EDDIE BLACK and it comes from the original shoots for Bad Influence, back when young TOMMY HAINE had just turned eighteen.