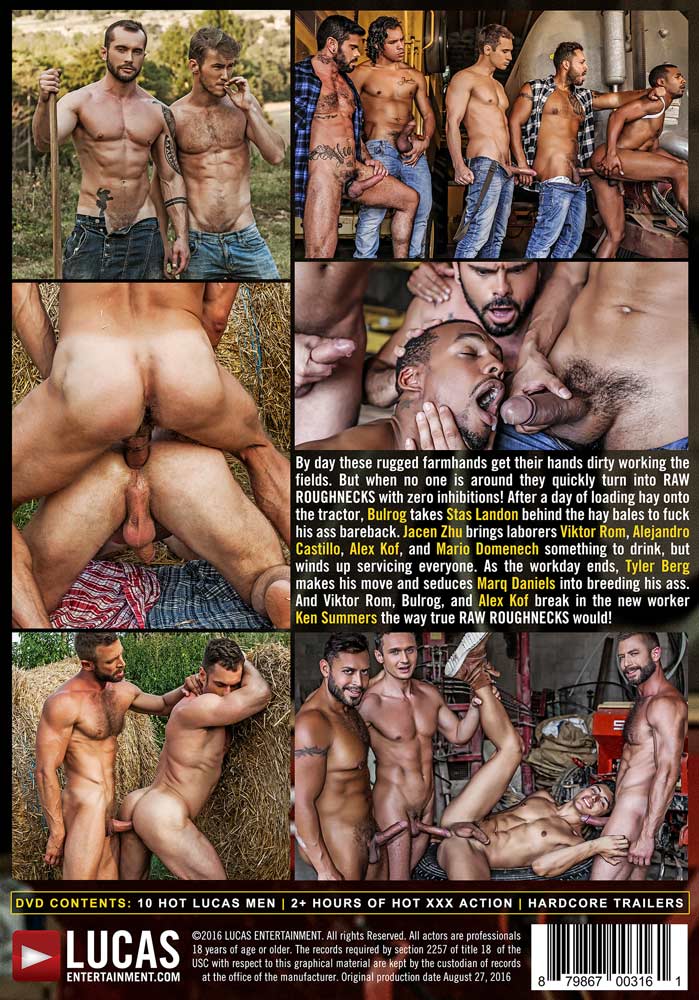 Bulrog is new to the farm in Barcelona, and it is Stas Landon’s job to show him how everything works. Stas and Bulrog are used to working long days with their hands, and they have the harden muscular bodies to prove it. Bulrog admires Stas’ physique as he works, so why not test the limits of their blue-collar relationship? Bulrog leads Stas Landon behind some hail bales where they are out of site. Once they’re hidden away the roughneck men strip down and show off their alpha-male bodies. Stas submits to Bulrog and services his cock with his mouth and ass. If you check out the 17:10 timestamp, you’ll see Stas’ ability to take dick as Bulrog pumps him hard like a man.

There’s a lot of work going on around the farm: Viktor Rom, Mario Domenech, and Alex Kof are hard at work making repairs to the equipment. Alejandro Castillo brings Jacen Zhu over to the equipment garage to offer everyone some water. But it’s his throat and ass the guys are interested in, and each guy gets his turn with Jacen. At 4:50 you can see Jacen working on all of the uncut cocks as he gets his ass licked. And at 7:45 the fucking begins with Alex raw-dogging Jacen while he makes out with Alejandro and Mario sucks his hard-on. Viktor is close behind to be the second to plow Jacen bareback.

Tyler Berg has had his eye on Marq Daniels ever since he started working on the farm. Marq is a beautiful guy to look at, and his body is perfect; there’s not an ounce of fat on him. Tyler has been eager to see Marq’s dick for a long time, and one night as it gets dark out Tyler makes his move. Much to his excitement, Marq is willing to give Tyler a go. Marq Daniels is strictly a top, which is perfect for Tyler. When Tyler Berg sees the beautiful dick Marq has been hiding in his jeans, he immediately sets out to suck it until it’s hard. Marq loves getting rough with his bottoms, as you can see at 28:10.

Ken is the new guy around the farm, and he took the job because he knows the reputation of the other guys that work there. He bumbles on his first day to tempt the impatience of Viktor Rom, Bulrog, and Alex Kof -- three of the alpha-ale tops working on the farm. No work gets done: Ken is too busy surrendering his body to the tops around him, and they’re not shy about using what’s offered. At one point Alex and Bulrog test Ken’s limits and double-penetrate him at 8:20. Ken is all about service, and this is a hot introduction for him. Alex, Viktor, and Bulrog love using Ken as a cum-hungry pig!